Warning: To enhance the user experience on this site we use cookies.

I agree I disagree 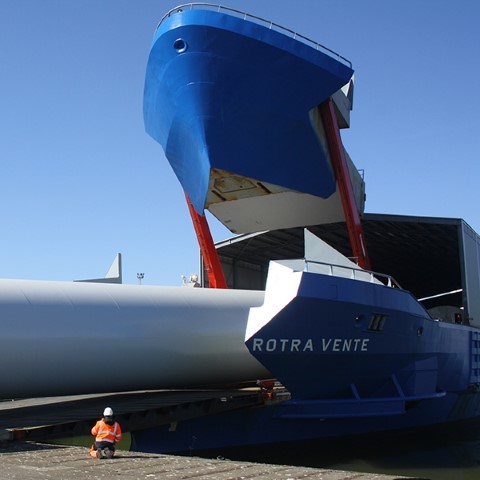 These parts were produced in the North of Spain, and shipped from the port of Aviles on board of the special purpose vessel Rotra Vente.

Despite the COVID-19 crisis, Otary and its contractors are working round the clock to keep the construction of the SeaMade offshore wind farm on schedule, taking rigorous precautionary measures, amongst others by respecting social distancing in the execution of the Works.

Over the coming months, Rotra Vente and sister vessel Rotra Mare will ship all wind turbine components (58 nacelles, 174 tower parts and 174 blades) for the SeaMade offshore wind farm, from various sites, to the REBO site in Ostend.

The main activity on the REBO site will be the storage of parts, the pre-assembly of the tower parts to complete towers, and loading of the Installation Vessel ‘Apollo’ that will sail from Ostend to the SeaMade offshore sites to install the wind turbines on the foundations. All foundations and the two offshore substations were put in place in the preceding months. The harbour of Ostend has a crucial role in the successful realisation of the SeaMade project.

“ We are aiming for a timely completion of Belgium’s largest offshore wind farm, despite the current Corona crisis, as this is an important step in the country’s energy transition. 58 8 MW wind turbines should produce enough electricity to provide 485.000 Belgian households of green energy thanks to a close collaboration and extreme commitment of a dedicated and highly experienced team and contractors. SeaMade contributes significantly to Belgium’s binding goal of having 13% of our energy produced out of renewable energy sources by 2020. Half of this renewable energy production will come from offshore wind energy. SeaMade will contribute to almost one quarter of the required offshore energy production”